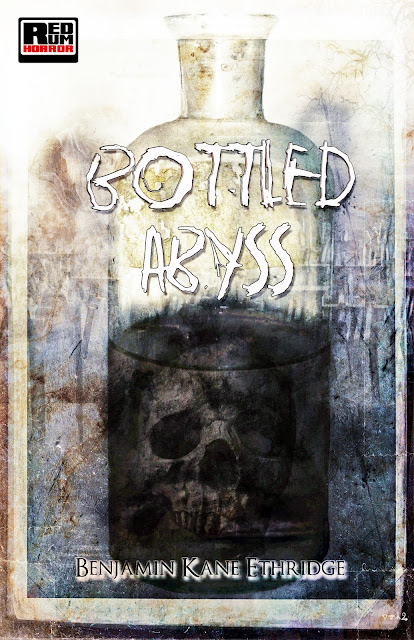 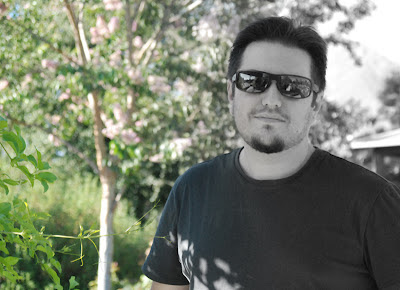 Benjamin Kane Ethridge is the author of the novel BOTTLED ABYSS (see above), BLACK & ORANGE (Bad Moon Books 2010), for which he won the coveted Bram Stoker Award, 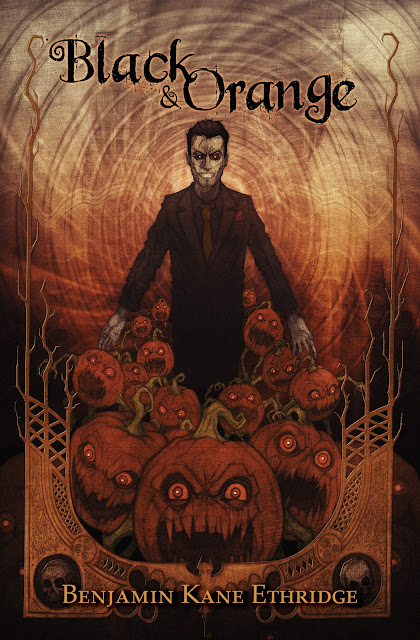 and the forthcoming DUNGEON BRAIN (Nightscape Press, coming fall 2012). For his master's thesis he wrote, "CAUSES OF UNEASE: The Rhetoric of Horror Fiction and Film." Available in an ivory tower near you. Benjamin lives in Southern California with his wife and two creatures who possess stunning resemblances to human children. When he isn't writing, reading, or videogaming, Benjamin's defending California's waterways and sewers from pollution.


My parents had a typewriter, and to my utter astonishment, I discovered I could type both black and red colored words. After I ran down the red ink ribbon, typing gibberish, I just continued on from there with black ink, which continues to this day via computer.


I start with the ending of a story, so I always know how it ends, but I’m never exactly sure how it gets there. I create an incomplete, loose outline that advances a few chapters at a time. I try to keep at a 3000-word-a-day rate, for five working days a week. I’ve been terribly lazy lately though and have been doing 1800-2000 words. It doesn’t help when I’m busy with other parts of life as well. The good thing though is I feel bad about it and try to improve my numbers after too long.


4. Who are some other writers you read and admire, regardless of whether they are commercially “successful?”


5. Should the question mark in the above question be inside or outside the quotes?

In fiction, sometimes it depends on the rhythm you’re going for. But most often I’d say comma placement depends on how the items are related. If you say, “The senator was detested, loathed, and hated,” the last comma doesn’t look right to me. Here’s why: the verbs are too similar—that final comma creates a pause to infer a stress on the last item, which doesn’t require one because of the repeated idea. However, if you say, “The senator was disrespectful, handsome, and cowardly,” it looks spot-on, especially if the most important thing you’re trying to communicate is the senator’s cowardice.

Benjamin, you are the first author to discuss the stylistic implications & applications of the comma versus the grammatical requirements of it. I often deviate from established "rules" of writing when I want to create an effect or an emphasis, or simply to wax eloquent. Thank you for illustrating this.


7. What is your book BOTTLED ABYSS about and how did it come to fruition?

Bottled Abyss is about a couple who have lost their child and are disconnecting from life. They happen upon a bottle containing water from the River Styx one day and discover that the waters can heal and kill. What they decide to do with that power unfolds in the pages thereafter.

Fruition? I was in a morbid mood for a few months, so I decided to write something that took advantage of that state of mind.

I’m working on the NIGHTMARE BALLAD trilogy. I can’t say much about it, other than it’s going to drive people out of their damn minds. I’ve already lost mine just writing it.

The historical adventure novel, “Two for Eternity,” by Carl Alves. It’s a lot of fun so far.

Reading great writing inspires me. Some people say reading bad writing inspires them, but not me. I start wondering what the point is, especially if dribble and dreck can make it to press and people actually buy it (probably questioning if they’ll ever pleasure-read again). It’s depressing. So, whenever possible, I try to read the good stuff and make-believe that all readers want good writing.

This is an excellent point, Benjamin. I have often found myself thinking the same thing. I read widely, both traditional and indie authors. I must say I find quality writing at both ends of the publishing spectrum. But, as you said, I enjoy reading really great writing; it's very inspiring. That being said, poor writing is also beneficial because it helps me re-remember for the umpteenth time what weak writing is. It also takes some of the pressure off me, because I re-remember, again for the umpteenth time, that a powerful story is not built solely upon grammar and syntax and style; it is the STORY which ultimately matters.


Finally, is there anything you’d care to add? Please also include where people can read your published stories, buy your book, etc.


For a listing of my novels, here’s my Amazon author page. Have at it, you beautiful, sexy, generous people.

Thank you, Benjamin. Congratulations on the Bram Stoker Award. No small feat, that.

Be sure to take a moment to check out BOTTLED ABYSS and BLACK AND ORANGE. And stay tuned for the forthcoming release of DUNGEON BRAIN, which will be featured here in a follow-up interview with Benjamin.
Posted by Ryan Schneider at 8:35 AM