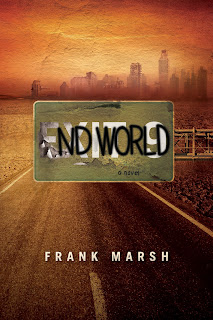 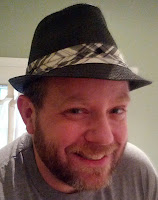 Frank lives in Broomall, Pennsylvania with his wife, Nicole, his two human children Cara and Natalie, and his two feline children Pandora and Roxy. Not to mention the newest addition to his family, Lucy the Fish. He is a husband, a father, a homeowner and a working stiff, as well as a writer, an eternal optimist, a hopeful dreamer and an avid sports fan.

Frank has been writing since he was a child. He began ENDWORLD - A Novel when he was 19 years young and has finally finished it at almost 38. He enjoys spending what "free time" he has with his family and friends, and updating his blog "Random Musings of a Pseudo-Madman Version 2.0" (http://randommusingsofapseudomadman.com). You can learn more about there, via THE ENDWORLD SERIES homepage (http://theendworldseries.wordpress.com), via his Facebook Page (http://www.facebook.com/frankmarshauthor) or via Twitter, where he goes by the handle "@madchronicler97."

1. How did you get into writing and why do you write?
I fell in love with writing as a teenager. Articles and editorials for my school newspaper, at first. Then freeform essays called “Dissertations” that my friends and I kept a book of. I kept writing non-fiction, opinion-esque material in college, but I also started writing fiction. I actually wrote an early draft of ENDWORLD - A Novel when I was 19.

As for why I write? I do it mainly to tell what I think is a cool story. But I also write from experience, i.e. I write about the things that I’ve been through and the people and places that have had an impact upon me. Sometimes, I fictionalize them but others, I don’t. I’ve probably got a non-fiction book or two inside of me, waiting to be written.

2. What do you like best (or least) about writing?
Best? The process of telling a story. I can get completely wrapped up in it for hours at a time. I call it my “zone” and my wife is well aware that it exists. Thankfully, my daughters aren’t old enough to understand it yet. I do the bulk of my writing after they go to bed.

Worst? All the other “stuff” that comes after the telling, i.e. editing, revising, et cetera. I know how crucial those things are but for me? If I could just write and never have to worry about a dangling participle or the misuse of a semicolon I’d be a happy guy.

3. What is your writing process? IE do you outline? Do you stick to a daily word or page count, write 7 days a week, etc?
Generally, I write the way I think. And then I reread what I wrote and nine out of 10 times revise it. I don’t hold myself to a set page count or word count because I know that some days, I’m not going to be able to write a single word down between playing Peek-A-Boo and watching “Dora the Explorer.”

One thing I have started doing is outlining. When I decided to rewrite ENDWORLD - A Novel I realized, about 50 pages in, that the idea was just too darned big to write on the fly. So I wrote up a treatment for it. The two, planned sequels—CHILDREN OF ENDWORLD and HEAVEN AND ENDWORLD—both already have healthy outlines. I know that the bullet points on them will change a handful of times before I’m done, but it gives me a structure to work with. In this day and age, plot holes doom your project to irrelevance.

4. Who are some other writers you read and admire, regardless of whether they are commercially “successful?”
I grew up reading Stephen King, and to this day, I try to read everything that he comes out with as soon as he comes out with it. Unfortunately, reading for leisure is not as easy as it used to be. I was also a big Asimov fan growing up, which is probably why I originally decided to write a story about robots. Barker, Straub, Crichton, Grisham, Cussler, Jordan, Martin, Anthony, Rice… I don’t want to leave anyone out but I’m sure that I did.

As for non-commercially successful writers? Some of the most influential people in my life are unrecognized artists. Authors, bloggers, painters, poets and musicians. I hope that if ENDWORLD - A Novel is successful, I can use that success to better draw attention to people like them. I have plans to do so. I haven’t put them in motion yet but they’re there. Stay tuned. ;-)

5. Should the question mark in the above question be inside or outside the quotes?
Inside. I think.

6. What’s your stance on the Oxford Comma?
I hate it. It breaks up the “flow” of a sentence. “Honey? Can you go to the store for me and pick up bread, lunchmeat, and cheese?” See what I mean? There’s no need for a comma before the “and.” “Lunchmeat and cheese.” It just sort of rolls off the tongue that way, doesn’t it?

7. What is your book, ENDWORLD - A Novel about and how did it come to fruition?
ENDWORLD - A Novel has quite a history. Almost 20 years’ worth. One summer, I was working in a library at a college. I was in the process of reorganizing the basement periodical room when I had an idea for a scene. I quickly grabbed one of the long, blue “check out” cards that I’d been jotting down names and issue numbers on, stuck it in the old, manual, Royal typewriter that stood sentinel over the basement, and started typing. Fifteen minutes and two cards (front and back) later, I reread what would become the beginning of the first to last chapter of the book. The words have been changed a bit since, but in essence, the scene is exactly as I originally wrote it.

The book is set in the future: An indeterminate hour, day, week or month (“Because such concepts no longer matter in Endworld.”), 15 years after machines created The Administration: A totalitarian government that provides for, but suppresses humanity. The Administration has been and remains at war with the People’s Rebellion for Freedom and Equality, or PRFE for short.

The original idea for the book was “Huck Finn” meets The Wonder Years meets “The Terminator.” Over the years, it’s evolved into the coming of age story of William MacNuff, a 17 year old who, on the eve of his 18th Birthday and the day that he will be drafted into Administration service as a “humachine,” decides to run east from the town of his birth to a hypothetical, “free” island that “no one of his generation has ever seen.” He is accompanied on his journey by his best friend, Maria Markinson. Along the way, they fall in love, deal with death and betrayal, and reluctantly find themselves drawn into a deeper, ageless conflict, the outcome of which will affect not only their world, but all of existence.

It still has aspects of the original inspiration sprinkled throughout it (an astute reader may pick up on one or two of the references), but its 100% me, now. At least I like to think it is. I don’t know. I guess I’ll let other people decide that for themselves.

8. What’s your current writing project?
I’m roughly 150 pages to the good on CHILDREN OF ENDWORLD, though I haven’t written much since I started prepping ENDWORLD - A Novel for publication. Other than that? Right now I’m just updating my blog, “Random Musings of a Pseudo-Madman Version 2.0” (www.randommusingsofapseudomadman.com) as often as I can. I expect that once the initial shock of actually being published wears off I’ll get back to William’s story in earnest.

9. What book(s) are you currently reading?
I just finished rereading With a Tangled Skein by Piers Anthony, and per the urging of a good friend, I am now reading The Memoirs of the Conquistador Bernal Diaz del Castillo, Volume One. It’s surprisingly engaging. In addition, I just downloaded A Shadow Passed over the Son by Ryan Schneider. I’ve been meaning on reading it ever since he offered me a copy last year. I put aside Bernal last night and read the Prologue. No lie: I can’t wait to see what happens next. Bernal may have to wait for a bit (sorry, Matt).

Right now, though? It’s my family. I’ve dreamed about two things for as long as I can remember. The first was being a published author. The second? Having a family. I figure all the other “stuff” like money and fame are secondary. I never dreamed of either. Never felt like they were important. I’ve always just been a guy who likes to tell stories. But doing something that I love and having a loving family that supports me in it? For me, that’s a dream come true.

Finally, is there anything you’d care to add? Please also include where people can read your published stories, buy your book, etc.
ENDWORLD - A Novel is now available at Amazon (in print or for your Kindle), Barnes and Noble (for your NOOK), via Createspace and via Smashwords, the latter of which is distributing it to the iBookstore, the Kobo Bookstore and the Sony Reader Bookstore. Links to all can be found on the book’s website, www.theendworldseries.com. More will appear as it becomes available. Pick up your copy today!

Thank you, Frank. I'm sure ENDWORLD will do well. It's got a fantastic cover. Engaging and eye catching. Let us know when the next installment is ready.

Grab a copy of ENDWORLD at either of the Amazon links below or visit Frank's website for other editions.